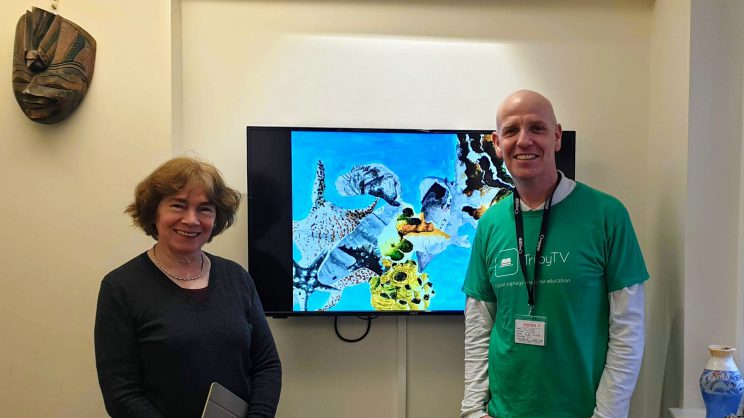 Digital Signage is having a huge impact in many independent schools across the UK and it’s great for TrilbyTV to be a part of that, offering a simple solution that is MADE for education.

We went to check out Channing School for Girls in Highgate, North London, who have been using TrilbyTV for almost a year now. Our director Neil Emery had met them at the Bett Show 2019 and we were really looking forward to seeing how they had been utilizing their digital signage since then. Upon arrival we were immediately greeted by a MASSIVE multi-screen display in the reception area. It was fantastic to see the impact that a screen can have. When thinking about good first impressions, this is definitely the way to go! 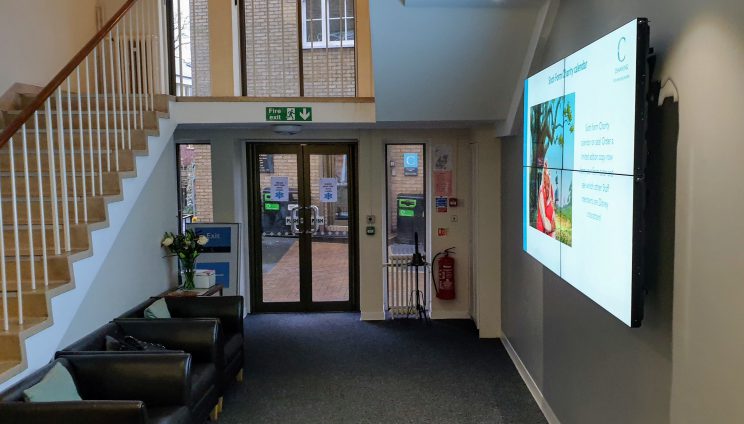 Soon after our arrival, we were met by IT Manager, Hilary Wilmer who sat down with us in the staffroom. Hilary shared what her initial thoughts were on TrilbyTV when she first came across us at the Bett Show.

“What struck me was the key to this is having more than one screen. I thought that each department can have its own screen, you can then put the teacher in charge of it. That was what I was pondering when I saw TrilbyTV and thought that this is the way to make it work!” 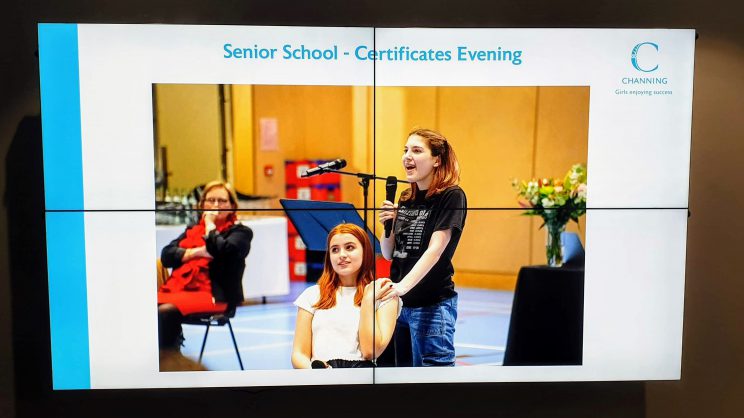 “Lots of people use them, they don’t all use them in the same way. We’ve got one up in art that’s doing a slideshow. It looks beautiful, it’s outside the art department and to see what they’ve been doing is really nice.”

“The technology department has been putting what they’ve been doing with coding making robots move which is very amusing. We’ve got a video up showing pupils flying drones through the playground and making them do somersaults in mid air. It makes other students think oooh, I’d like to do that!” 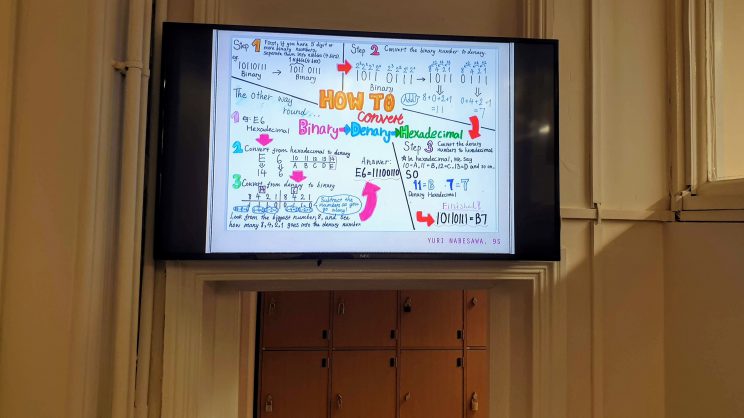 “We also had the year 11+ interviews and the parents came in for that. We turned the dining hall into an internet cafe and put magazines on the wall beside a screen. It looks great and gives them something to look at with the latest concert pictures and our full screen Twitter feed so that they can see everything that’s been going on.”

“Pupils love seeing their stuff on the screen, we also have competition results showing who’s got the most points. The English department are also using the technology and using it to publicise favourite books of staff and students.” 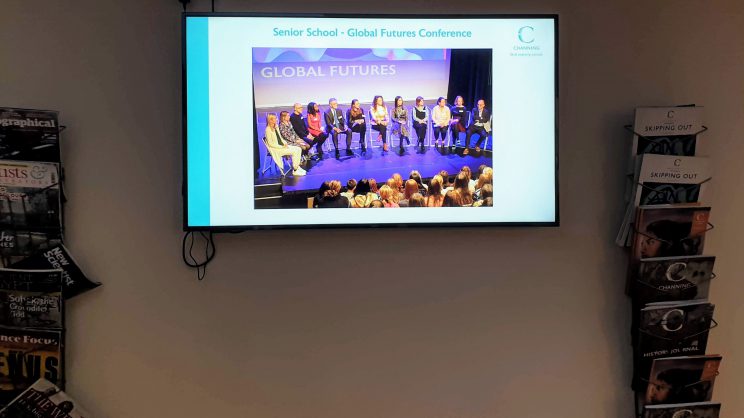 Hilary then took us to speak to the Assistant Director of Sixth Form, Rachel Williams. Rachel has been really proactively using TrilbyTV and its features. Walking into the sixth form stairwell, we noticed the weekly timetable up on the screen which is a fantastic way to get it noticed.

“When we did the TrilbyTV training session I was thinking I want a screen in Maths.” she said, sitting in front of her screen with the slides on TrilbyTV ready to go. “I’ve got a notice board up and nobody ever looks at it. Now I’ve got an online Google Slides presentation which allows me to update instantly if there’s been a room change.” 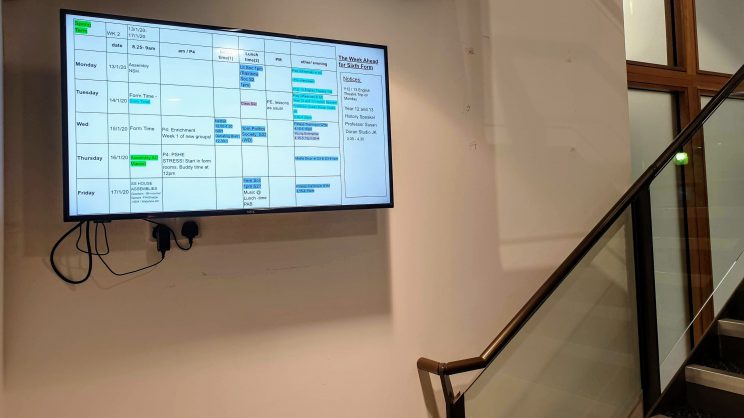 “In Maths, we also have a new puzzle of the week. We also had the maths challenge last term and I knew that year 11 were all going to go past. I took everything off the Maths board and put a big sign up saying “SILENCE – SIXTH FORM DOING AN EXAM” and I could hear them going “shhh shhh, they haven’t finished yet,” it was sooo great, I didn’t even have to leave the room.” 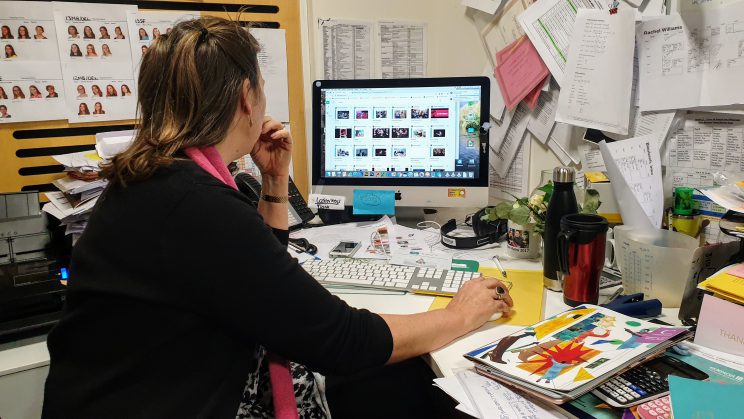 We then went on a tour of the schools signage and it was fantastic. The work that they were showcasing was exceptional, along with results, achievements, memos and some great examples of Channing using Twitter as a great way to keep parents and the wider community up to date. 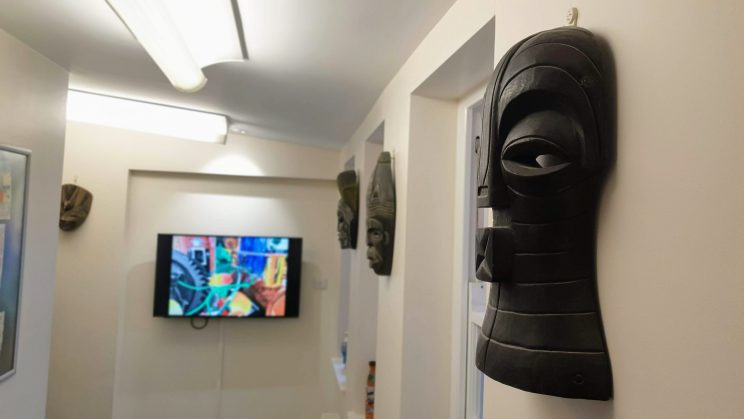 The great thing that we found was that some of the screens fit in perfectly with the environment around them. The art department in particular had masks on the side of the walls and a screen centrally showcasing the student art. It just shows that digital signage is not invasive and can integrate with its surroundings with just a simple bit of planning. A big hats off to Hilary, Rachel and the rest of the Channing team, you guys have seriously nailed it when it comes to your schools digital signage. 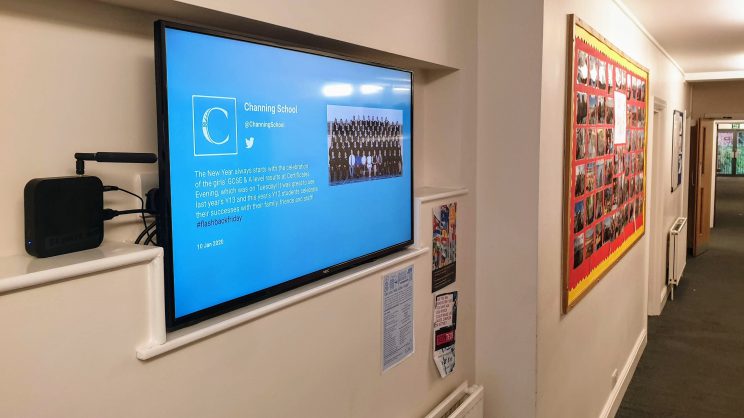 Get set up in less than 10 minutes, no card details required.